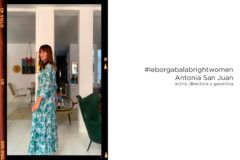 Sharing the experiences and reflections of women who inspire us and who, in addition, wear our clothes, motivates us doubly. We started the #leborgabalabrightwomen series of interviews with the Retiro collection in Antibes SS21 and we are very excited to inaugurate this new Harris Tweed Club FW21 season with the actress, director and screenwriter, Antonia San Juan.

“Because one is more authentic when it most resembles what she has dreamed of herself”, is one of the famous phrases of La Agrado, a character she played in Pedro Almodóvar’s “Todo sobre mi madre”. We chatted with her about the repercussion that this character has had on her career, about her philosophy of life, about the intimate moments that he spends painting while reading a text and much more.

Since you were little, a teacher gave you hours to direct plays, do you think that at that moment you already knew that you wanted to dedicate yourself to acting?

Of course I did, I always knew.

Is there an actress who later awakened your vocation?

You are a multifaceted artist: actress, director and producer, in which of these facets do you feel most comfortable?

Acting is the area that I feel most comfortable with, but in order not to be left behind, and not just become “fashion”, I had to become a Director and Producer to be able to do the roles that were not offered to me.

Your character La Agrado in “Todo sobre mi madre” by Pedro Almodóvar is a key character in your career, what is the best and worst thing that he has given you?

The best thing about La Agrado was its internationality. Attributing the worst to the character does not seem fair to me, the character was all advantages; the worst was the look of the others who thought I was the character.

What is cinema for you?

The cinema until two years ago was something almost non-existent; I went twelve years without being called to make a movie. Now I start to have projects.

When you prepare a character, how do you deal with not knowing how it will be received?

I don’t think about it. I live the entire creation process and I am not thinking about the results.

With a long career behind you, do you easily get rid of the projects presented or do you live with them throughout your life?

For which of your films, monologues or characters would you have liked to have more impact?

When I write my biography it will be seen, it is still too early to make the story.

In an interview you commented that you saw on television Estudio 1 and Novela and that since these programs existed, people talked about culture, why do you think that nowadays there is not so much interest?

Simply because these spaces are not offered. And because from the media there is an agreement to promote ignorance, it has been an instrumentalization of ignorance; the individual has been taken to places such as “gossip”, criticism, consensual abuse … that’s what we see.

Physique is still being talked about as the main value in an actress and, as a consequence, there is an age when you become more invisible, why do you think there is this requirement?

Because we live in a patriarchy, a world of men; and more in this profession. Men have no expiration date and women are still the object of desire and we play that game.

Cinema is a reflection of the context we live in. What stories do you think current cinema should explain?

If the cinema is the reflection of the moment in which we live, the cinema right now is telling the moment that we live. A cinema where, from the moment the script starts, they are required to be white, not to offend anyone, to be politically correct, to be liked by everyone and obviously it cannot be an educational or restorative cinema; an entertainment cinema is simply made because people do not want to be questioned and the media gives what people are looking for.

We know that in your free time you paint, what are these moments like? What are your references?

The moments in which I paint while I am painting I am with a text next to it, because I need to be in two things at the same time. I can’t be alone in the painting, then I abandon it, take it back, change the color, paint over it because I’m excited to leave that original drawing that I’ve covered and if someone with a spatula finds it and scratches it, they will find my original.

My references on a conscious level do not exist. I may like a pictorial movement or I am a lover of the twentieth century, but when I paint I do it with free association and charge with everything that my retina has seen, but always unconsciously. I paint what is born to me. 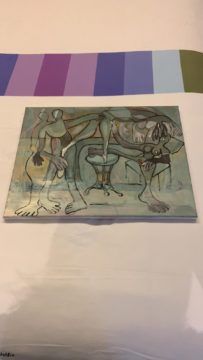 Portrait of a Dream by Antonia San Juan

What is your philosophy on the stage of life?

It comes from the investment of time and money made in psychoanalysis, it is based, above all, on 3 times a week for 25 years lying on the couch of a psychoanalyst reading free thought, and that has given me a very different look from the stuff.

You have followed our brand for several seasons, how do our garments make you feel?

I like it very much, they are very relaxed, comfortable and good quality garments. It has a lot to do with my vital moment.

On the cover, Antonia San Juan wearing a dress from our SS21 collection.